I processed another image last night.  This morning I showed it to my 6 year old daughter and asked her what she thought of it.  After some thoughtful consideration she said, "it's the Earth".   Kids always see the the obvious.

When she said that I was reminded of the "Pale Blue Dot" image.  In case you don't remember refresh your memory. Pale Blue Dot.

But of course it isn't the Earth - it is a very wide field image containing the planetary nebula,  M27 "the Dumbell Nebula".   In a planetary nebula, atoms of the expanding gas shell are excited to emit light by a super hot central star.  I explained this to my daughter and she wanted to know how much bigger it is than the Earth.

hmmmm.  Wikipedia to the rescue.  About 1.4 light years radius in the long direction.  Wow.  Bigger than I thought.  Unsure how to explain a light year to a 6 year old ...
{I mean really, I know what a light year is.  I'm just not convinced we humans can meaningfully connect with distances much beyond our direct experience.  I can imagine it.  Just can't feel it. }
...  I just settled for "much much bigger than our whole solar system".  You know ... we all know how big that is right?

Unfazed she replied, "so, bigger than a million billion Earths".  She likes that number - million billion.  If she can hold that in her head then maybe I should ask her about the whole light year thing.  Anyway, I quickly answered in the affirmative and scooted us down for breakfast before she prodded longer at the edges of my knowledge.

This isn't a very common image scale to show off M27.  I just wanted to shoot something with my new 100mm EF-L lens and it was cloud free in Velpecula at the time.  In truth I thought it would be larger.  But I kind of like the perspective - especially since I now know it is 2.8 light years across.  Also in the image is a bunch of open clusters and a globular cluster.  Can you find it?

Here is an extreme crop of the frame.  Pretty cool what 100mm focal length projected on a 18M pixel sensor can do. 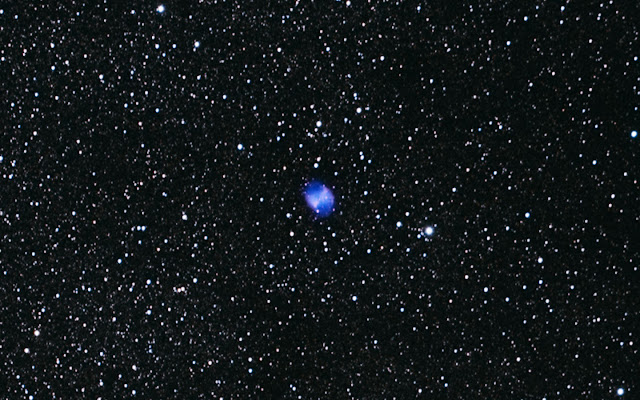 It didn't occur to me until I was writing this that early observers of these objects coined the term planetary nebula because of their similarity to the planets.  Exactly what my daughter thought.  She would be in good company with Messrs. Messier and Herschel.