OK, so say you have some hard won images that you want to share.  Now what?   You could:
I'd like to use this blog as a central hub.  But might be nice to have the linked images on a photo sharing site.   They all have advantages and disadvantages.  Zenfolio, pbase, Picasa web albums, Flickr and so forth.  I already have Flickr and Picasa web album accounts but discovered something really cool about Flickr last night.  If you share one of your images with the astrometry group and they will plate solve your image, post some nifty info in the comment field, and highlight interesting features ... like this: 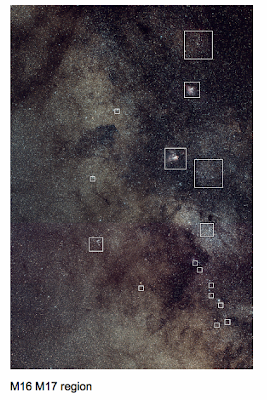 When you mouse over one of the boxes there is a little pop up that identifies the object, star or whatever.  Very cool.

If you want to try it just go here:

Just mouse over the image.  Below is some other info like the pixel scale and such.


But wait!  There's more.  Down in the comment field is a link to the World Wide Telescope.  Click that and your image is overlaid on the whole sky map.  Bazinga.

How cool is that?  So for now Flickr gets the nod.   Now I'll have to figure out how to connect Flickr and blogger in a peaceful way.  Ain't technology great?