The image below is one panel of a 4 panel mosaic.   Just wait until you see the full thing. 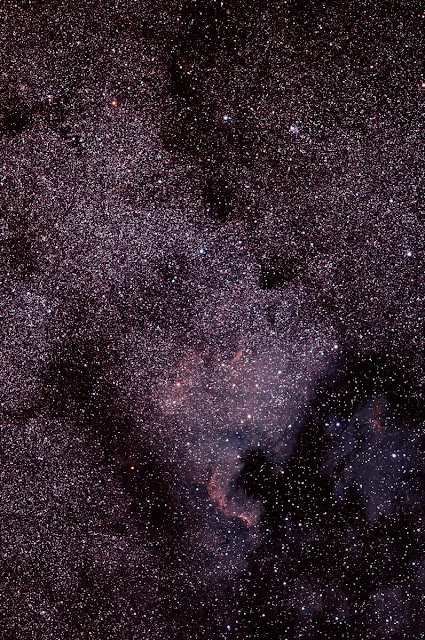 Well, take a seat because it's gonna be a while.

OK, so the image is one panel of a 1 panel mosaic.  If you have been following along at all you know that my time in New Mexico - as wonderful as it was in every way - only had one perfectly clear night.  That night I imaged M32 and M33 before the moon came to spoil the party.

The other nights, some of which were quite nice thank you, were only partly clear (or partly cloudy as the shift in emphasis might have it).  It was one of these other nights, when it was "oh man-o-man this is gonna be great" clear I decided to shoot a 4-panel mosaic of the Milky Way in Cygnus.  Oh, maybe an hour exposure time each.  Yeah - have to spread it out over two nights.  No problem.

Forty-three minutes into the first panel ... clouds.  High, thin, and hardly noticeable by eye.  Through the camera lens it is like looking through a window pane smeared with Vaseline.

So, the mosaic idea didn't pan out.  A night or two later I decided against any ambitious plan that would hinge on the necessity of another clear night.  Too big a gamble.  However I did get 43minutes of the first panel ... and at least I did start with a frame that had a "marquee" object - the North American nebula (and Pelican to the right).

Came out OK I think.  Really wrestled with the whole  "what color should I make it" thing.  I settled on a more bluish purplish look.  Blown out, eye-popping reds are just so ... well, red  {you see, I'm just jealous of you narrow-band imagers}.  I didn't want to just make it red because it is supposed to be red (even though it is, kinda sorta).

Color is proving to be more of an issue for me than I thought.  There is science, art, what "sells", and what makes me happy on a given day.  The color palette might be the same or different for all of them.

In deference to my current situation I'm going to let the last option guide me.

I'll finish that 4-panel someday.  I'd be thrilled if you were still here waiting for it.

Email ThisBlogThis!Share to TwitterShare to FacebookShare to Pinterest
Labels: Nebula