It's been a while posting but that doesn't mean I've neglected wearing the hair shirt.

I went to the 2010 Advanced Imaging Conference which was held over the weekend of Oct. 22.  I wavered about attending.  On the positive side, it was local - and it had a really great line up of speakers. On the down side it was rather spendy and since my regular imaging pal wasn't going I wasn't looking forward to being the token "Novice Hair Shirt".

In the end it was a great experience.  Met some really nice people and the talks were entertaining and informative.  I'd recommend the conference to anyone interested in astro imaging no matter what your experience level.  Oh, and they have a nice vendor fair which was well attended - all kinds of cool toys to look over.

Rogelio Andreo (see his Deep Sky Colors web site at right sidebar) gave a fabulous talk on his imaging techniques as well as some food for thought on image composition and goals.  It was the latter that made the biggest impression on me but I'll save those thoughts for another post.   On the technical side he talked about processing images with PixInsight in which he described some of the workflow and concepts.  As he said over and over again ... "not better, just different".

A week ago I finally downloaded the trial license of PixInsight and have been slogging my way up the learning curve.  I had been working in photoshop on an image of the Pleiades I took at Calstar, so chose that as my first go with PixInsight.  Below is a comparison of the same data - preprocessed in Nebulosity and the post-processed with PS and PI. 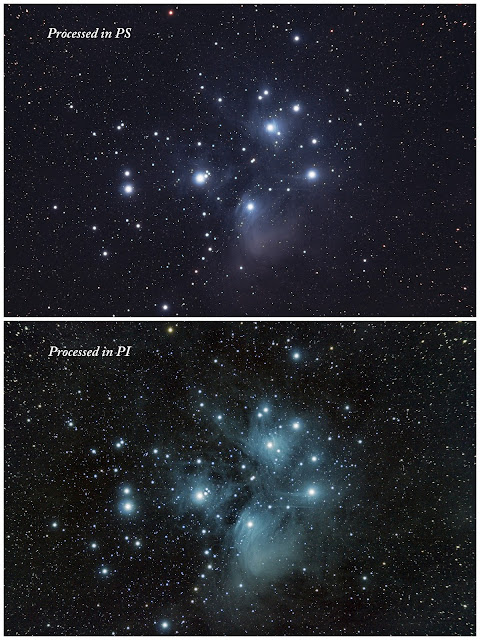 I know if I had worked a bit longer on the PS version I would have done significantly better than the above attempt - which admittedly kind of stinks.  And the PI version is stretched till the pixels screamed and bled noise all over the image.  But I could, in a rather short time - maybe a couple hours working through some of the tutorials -  come up with a result in PI that bettered my PS attempt.

Being relatively new to image processing I haven't yet locked down my synaptic pathways in the ways of PS.  This is one of those rare situations when not knowing much may be an advantage.  I can learn a new way of accomplishing something without having the disadvantage of going through a translation step.

So I've put aside PS for now - and decided to spend some time learning a completely new processing methodology - before becoming proficient at the one I've put months of learning into.  Beautiful.  How hair shirt is that?!
Posted by Carl at 5:10 PM