This past weekend I was in the Denver area to celebrate my neice's wedding.  Congratulations Kimberly and James!  We stayed near the Colorado School of Mines and had a few hours to walk around.  The Geology Museum was open and we spent an hour wandering around.  Highly recommended!

All kinds of cool exhibits on mining, radioactivity, fossils, UV fluorescent minerals, and gorgeous gemstones.  Walking downstairs you first encounter a pretty nifty exhibit on meteorites too.  Wandering a bit more I came across this. 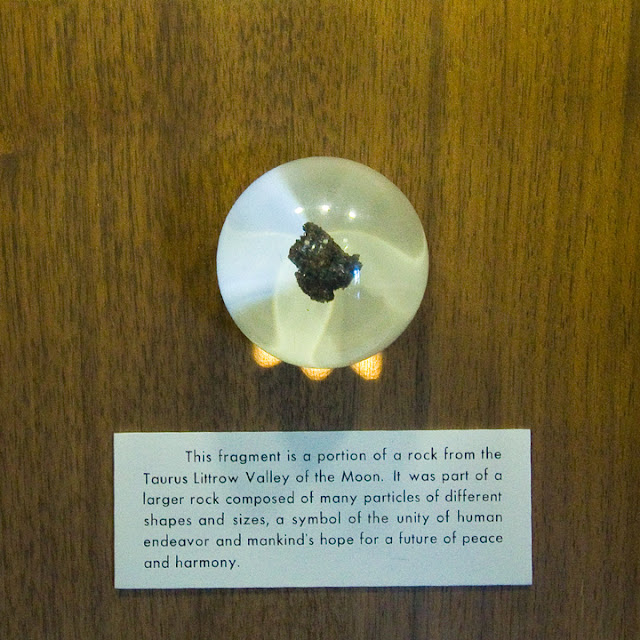 Moon rocks are on exhibit in many museums but somehow I don't think I have ever seen one in person.  This is one of the Apollo 17 Goodwill pieces - two given to each state and some 135 countries.  I did some reading about these Goodwill rocks and was saddened to learn that of the 240 samples given to international governments some 180(!) are missing or unaccounted for.  Of the 100 given to the US states ... 33 are "unaccounted for".

Even this little piece has a story.  It had gone missing for decades but thanks to a lost moon rock sleuthing project run by Professor Joseph Gutheinz at the University of Phoenix it was "discovered" this summer (2010) in the possession of ex-Gov. John Vanderhoof, who left office in 1976.  The official press release covering its return to the people and display at the School of Mines states that it "had been in the safekeeping of former Gov. John Vanderhoof".  Fair enough - at least he gave it back.  And just in time for me - it was put on display only a couple months ago.

(For the record I think Joseph Gutheinz is a hero.  He assigns his students the task of hunting down these missing rocks and has been instrumental in the recover of many.)

The rock is encased in a sphere of acrylic mounted on a cheesy wooden plaque, behind a plexiglass window, inside a hefty safe.  Good idea as I so wanted to touch it.  And the safe also keeps ex-Governors from "helping".  I stood and stared trying to take in what I was seeing in that unassuming chunk of moon.  These rocks are of remarkable scientific value.  And they represent so much more.

There are three ways to get moon rocks:

1.)  Moon rocks can be found on earth, shards blasted from cratering events and finding their way to us as lunar meteorites.  I heard somewhere that the prevailing thought in the 1800's was that all meteorites were of lunar origin.  Today only a hundred some odd meteorites of lunar origin are known - the vast majority getting their start as meteoroids.  As the sites chosen for the Apollo missions have been shown to be geologically anomalous, these rocks from random impact sites on the moon have special scientific relevance.


2.) And then there was the Soviet era robotic sample return mission(s) - which in itself is pretty amazing especially for the 1970's.  The three successful Lunas brought back a total 300 grams of samples. Here is a drawing of Luna 16, the first to bring back the goods for the Soviets.

I guess that is why I stared at that little piece of moon for a while.  Transfixed.

Some things really are worth doing.

Email ThisBlogThis!Share to TwitterShare to FacebookShare to Pinterest
Labels: Ramblings