Calstar 2010 is one week gone.  I did spend the extra night this year.  Ah, the extra night.  The night you hear about from the lucky few who stay one night more.  Of course it is always "the best night of the entire star party".  Inky dark.  Sugary Milky Way.  Dry.  No twinkle twinkle little star.  Is this somehow the reward for staying the extra night?

The experimentalist in me wanted to test the theory and I can say on the basis of one data point it is absolutely true.  By far the best night of the star party.  The half dozen or so of us that stayed over were spaced around the periphery of the Calstar field, guardians of our own peculiar good fortune.

My pals James and Dan close by enjoying crisp refractor views.  Rogelio and Eric at the far end creating their next masterpieces with deep, methodical expertise.   I'm there with gear akimbo intent on getting some serious time in the bank for M33.  It was a special night.

Over course of the star party I took wide fields imaged with my new 10-22mm EF lens as well as though my AT80LE refractor.  From 10 and 14mm to 480mm with nothing in between.  The EF-L lenses sat warm in the camera bag on this outing. 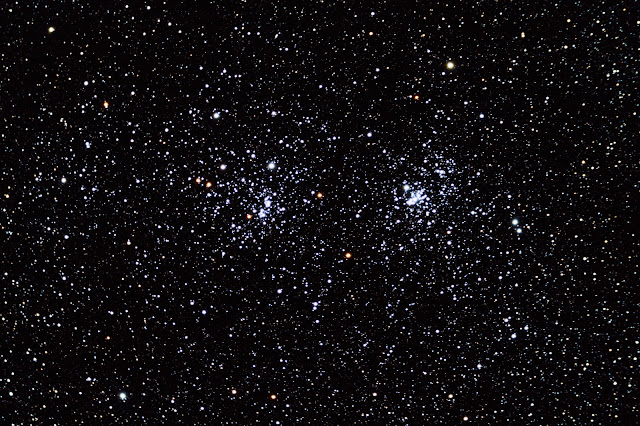 Double Cluster in Perseus.  click to flickr
There is a fair bit of curvature in the f5 field of the refractor - not surprised, I'll need some kind of field flattener.  The above is rather severe crop to make the worst bits go away.  I suppose I could have spent some more time making the stars prettier but mostly I wanted to start the processing queue with something easy.  I know I have some really challenging processing ahead.  Consider this some toe touches to get me started.