How hot is *your* camera?

Story time ... but with charts and graphs and stuff near the end!

When I was out imaging last week I decided to shoot 30 second sub exposures for the image in the previous post.  The other image (still processing, up soon) used 60 second sub exposures.  So that decision meant that I would have to shoot two complete sets of darks as they must match the exposure time, ISO, and temperature of the light frames.  Typical hair-shirt move.

So at 3:30am I start shooting my darks.  At least it doesn't take a lot of skill.  Block the lens, check the ISO,  set the interval timer, sit back and ponder life's mysteries.

I said it doesn't take a lot of skill, not zero.  I still had to change the exposure time and interval for the two sets.  Thought I did, but hey, it was now after 4am.  Yes, I came home with 2 sets of 30sec darks.  Sigh.  Well, at least I had a lot of 'em.

I knew it was roughly 60F out there so my plan was to shoot my 60sec darks in the garage when the temperature was about the same.  Done.

Previously I had discussed the idea of a dark library with my imaging pal.  He thought it would be cool if one could measure the temperature of the exposure, bin them by temperature and exposure conditions and then match them to the temperature of the light frames.  Cool Beans. I knew that many DSLR's had temperature sensors from past experience shooting Giga-pans in the hot sun.  Ever see that "your camera is getting too hot" icon?  But how to get at that temperature?

Some searching led me to exiftool - a wonderful utility to extract *all* the hidden goodness from your camera image headers.  A command line utility to boot (a GUI is available for the less righteous - windows only).  But for us Mac and Linux folk it is full on shell time.  Pull up that terminal get crackin!  Some thrashing around and sure enough, with the right incantation I got it to spit out...

Time to get real sweaty and pull on another hair-shirt.  Some hours later - with shell script higgledy piggledy- a file including a table for each dark exposure was mine for the taking.

I knew that using Live View and heck, just shooting images, would heat up the camera (why have a "too hot" warning otherwise) but I was quite surprised by what I found.  The results are shown in the graph below. 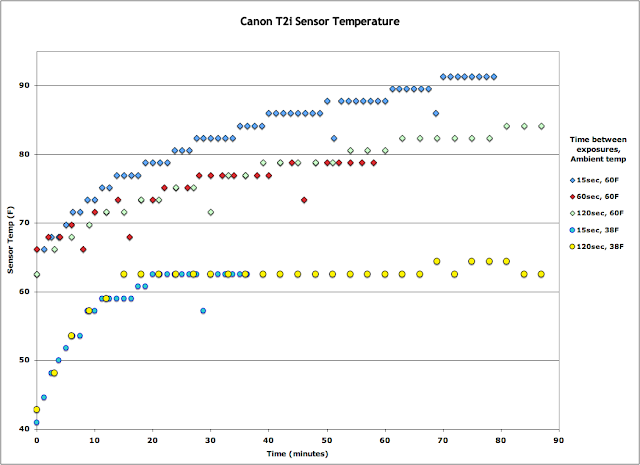 First just follow the blue diamonds.  Start with the camera turned off and equilibrated out in the garage.  Ambient temperature steady at 60F.  Set timer to expose for 60seconds, wait 15seconds, take another.  Wash, rinse, repeat.  See temperature climb.  See temperature rise to over 90F!  Yikes.

OK.  Say you are willing to put in a 60sec delay between exposures to give the sensor time to "cool down".  Follow the red diamonds.  Better, but hey, still pushing a 20F rise in 45minutes.

Even a two minute interval doesn't buy much and I'm not waiting around that long.  An ambient temperature of 38F allows for shorter intervals and the temp levels off quicker.  But instead of a brisk 40F you are actually imaging at a balmy 60F.

A check of my light frames shot in the field show the same effect.  Only difference is the camera *starts* warm since I have taken test exposures, focused with Live View and whatnot.  Those first few shutter clicks get you warmed up in a hurry.   Guess we know where all that energy stored in the battery goes.  Huh.

The bad news is self-evident.  The good news is that it is at least possible to know the temperatures of your frames and match darks accordingly.  The not so good news it that doing that is a bit of a pain.  The great news is that one can get just fine images not worrying about this.   More shooting, less fussing = more fun.  But for those of us with a closet full of hair-shirts ... no rest for the weary.  Dang, yet another advantage those cooled-CCD folks have.

How does one use exiftool to get at all this?  I'll post what I've learned later.  For now I leave you with this handy tip.

If you are ever caught out lost and freezing in a forest ... just curl up around your DSLR and hit the shutter every minute or two until help arrives.   You heard it here first.
Posted by Carl at 9:34 PM